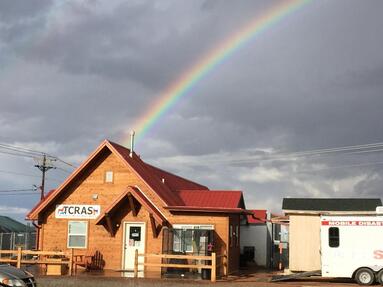 “Older animals, three-legged animals, blind animals, and dozens of healthy dogs and cats and scores of litters–they’re all the same to us. They deserve our time and attention and efforts to move from this difficult life phase to one in which they will be happy and contribute to the happiness of the people who adopt them,” said a TCRAS Volunteer.

Not so long ago, there was not as much hope for animals in need in Teller County as there is now.

Prior to the late 1980’s, there were few animal services available in this region. In 1988-89, the current TCRAS facility, located at 308
Weaverville Road in Divide, was built by the local Homeowner’s Association. Teller County managed it, a few generous citizens helped
out by cleaning kennels and working to find homes for as many dogs as they could, but because there were no adoption capabilities at that time most of the dogs that entered were euthanized.

At the same time, the City of Woodland Park ran the “Hound Pound”, a small area of dog-runs with one staff person who also served as the only Animal Control officer, and many of these dogs were also euthanized for lack of homes. This officer and a friend, using their own time and money, took on the task of taking dogs from the Hound Pound to a pet store in Colorado Springs and holding adoption fairs on the weekends, managing to adopt out more than 300 death-row dogs in three years.

Woodland Park was considering contracting with the County for animal control services, and the County was looking at the option of taking all animals to Colorado Springs to the Humane Society of the Pikes Peak Region (HSPPR). There were significant concerns about removing the animals to another city. There was also a growing sense that our community wanted to move towards taking over responsibility for their own shelter.

In 1999, more volunteers came forward with a plan to do just that and formed the Rescue Animal Force (RAF). Again, with mostly volunteers, they combined the animal care needs for both the City of Woodland Park and Teller County and began housing and finding homes for all the animals that came through the shelter doors. In the year 2000, the Teller County Regional Animal Shelter (TCRAS) was formed and continued under this leadership to the present day.

As the county has grown, so, too, has the number of animals landing at TCRAS. An expanded more efficient shelter has come to completion so that the homeless animals, and our citizens, can receive improved services as well as serve as an educational resource on companion animal care for the community.
​
Since 2008, 4,458 dogs and 2,034 cats were either returned to their original homes or placed in new ones through the efforts of TCRAS. Through these efforts the shelter has contributed greatly to reducing the pet overpopulation problem by spaying and neutering each animal before it is adopted.
Support Us