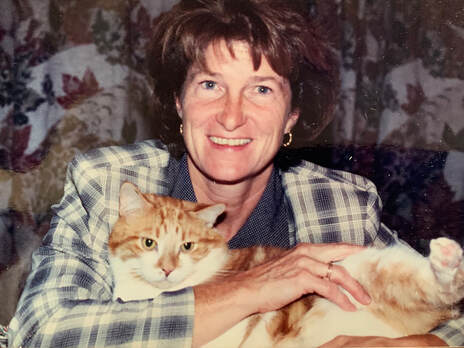 ​Margaret Ann Shelly Hunt
Divide, CO
On July 3, 2020, after a three-and-a-half-year battle with cancer, Margaret (Maggie) Hunt, 71, passed away peacefully at home, with her beloved husband Barry Hunt by her side.

Maggie was born June 3, 1949 in Pontiac Michigan, the daughter of Chester P. Shelly and Margaret (Neafie) Shelly. She grew up with two sisters, Mary Wallace Shelly and Christine D. Shelly. Maggie was a 1967 graduate of Jamesville-DeWitt High School (Fayetteville NY). Her undergrad education included attending Connecticut College for Women, University of Louisville (KY) and Syracuse University (NY) where she graduated in 1973. Maggie completed a teaching certificate and master’s degree in at University of Colorado, Colorado Springs (UCCS) and received her principal’s license at University of Denver (DU).

While attending Syracuse University, Maggie enrolled in a semester abroad program in Poitiers, France. On the transatlantic flight to Paris she met another Syracuse student, Sara Jane Sommer. During that trip they forged a friendship that eventually brought them to the heart of Colorado in September 1976 with another dear friend and Syracuse alumna, Sue Prendinger.

Maggie’s first teaching job was in a one room schoolhouse in Guffey (Park County, CO) instructing second through eight graders. From there she moved on to teach in Fairplay and Lake George. Moving to Teller County and WPSD Re-2, Maggie settled in Divide with the love of her life, Barry Hunt, whom she had married in March 1989. She taught American History at Woodland Park Middle School before transitioning to administration as an Assistant Principal at a school with more than 800 students.

During her years in education Maggie touched the lives of many students, both as a teacher and as a vice principal. She took her responsibilities seriously and her sincere and genuine concern for her pupils was inspiring and compassionate. Her talents took her outside the classroom and onto the golf course as a coach for the youth golf team.  Even after retirement in 2005, students in Woodland Park benefited from her generosity and the work she did with the Woodland Park School District Foundation helping to provide grants for programs and projects that enhance and enrich the school experience.

Maggie was a true renaissance woman whose interests were vast. A passion for exploring the world led Maggie and Barry on exciting and memorable trips and cruises. They opened their home to rescued pets who found safe refuge in an environment created as a haven for these precious family members. She contributed time, energy, and resources to many causes making an indelible and positive impact on her community. A talented photographer (Scene Naturally) and as a member of The Mountain Artists was a vital part of the committee that identified and chose exceptionally talented youth to receive art scholarships. While volunteering with The Mountain Artists, she was active in helping to promote and put on the Mountain Arts Festival held annually in Woodland Park. As a dedicated volunteer, Maggie helped the effort to bring the Pikes Peak Regional Hospital to Teller County and provided support to patients and visitors receiving hospice care.

A woman of strong and enduring faith, Maggie did not need to preach her religious convictions because she practiced them graciously, consistently, and without prejudice.  Maggie was grateful that she could bring joy and comfort to others, often through simple, anonymous acts of kindness such as paying for strangers’ meals in restaurants, but also, in intensely moving ways, by giving unconditional love and support to family and friends in their times of profound need. Locally, Maggie was active in Grace St. Stephan’s Episcopal Church and was also a member of St. John’s Episcopal Church church in Naples Florida where she had a second home.

In addition to her parents Chester (Chet) and Margaret Shelly, Maggie was preceded in death by her sister Christine D. Shelly. She is survived by her husband of 31 years, Barry Hunt, her sister Mary Wallace Shelly, father in-law Harvey B. Hunt Jr, sister-in-law Linda M. Hunt, brother in-law Bryan L. Hunt, nieces Claire and Collen Hunt, nephew Casey Dolen and grand-niece Rosie Hunt. Maggie was tightly and lovingly bound to her “East Coast Tribe” of transplants to Colorado, including Sara Doud, Sue Prendinger, Laura Canby, Nick Lisi, Chris Carlson and Helen Dyer, as well as countless other cherished friends. These long, enduring friendships are a testament to the steadfast legacy of love that Maggie nurtured throughout her life.

A private memorial event is being planned, per Maggie’s instructions, by Barry and her friends. Mountain Memorial Funeral Home (www.MountainMemorialFH.com) in Divide is handling other related arrangements.

For those who wish to honor her memory with an appropriate and caring gift, it was Maggie’s wish that donations be made to help further the important work of the Teller County Regional Animal Shelter (TCRAS), a local nonprofit she enthusiastically supported. When making an online donation to TCRAS, please enter Maggie’s name in the Message of Support box. If making a donation by check, please be sure to put her name on the Memo line.
Click HERE to donate to TCRAS in Maggie's honor
Support Us